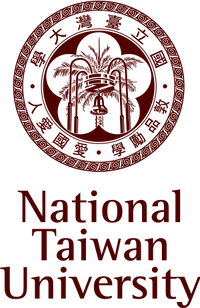 National Taiwan University is the prestigious flagship university of Taiwan.

NTU has 11 colleges, 54 departments,107 graduate institutes, and eight master's and PhD programs, which range from the natural sciences to the humanities, society, and the arts. It offers more than 7,800 courses each semester, placing it tops in the nation in terms of both breadth of academic fields and volume of programs. Students who study at NTU become a part of the nation’s richest center of learning and are given the opportunity to receive a diverse, superlative education.

National Taiwan University's vision embraces strong knowledge, strong techniques and strong elites, guided by independent thought and a pioneering spirit of enterprise. Experience of the Chinese world is a considerable asset for students of today. An NTU education gives a clear competitive advantage – we are ranked 1st in the entire Chinese-speaking world by ARWU, a major international university ranking.

Some of the University's wide-ranging resources, services and advantages include:

NTU's main location is a large garden-campus in the center of Taipei, and is easily accessible by public transport.

The largest library in Taiwan

A large part of the campus is devoted to sports and exercises, including the New Sports Center opened in 2002, the Old Stadium and various outdoor tennis courts and playing fields.

Student activities flourish as an integral part of NTU's liberal and pluralistic environment.

We are inviting applications for faculty positions at the ranks of Professor, Associate Professor, and Assistant Professor in, but not limited to, the following areas:  Multi-Agent Systems, Intelligent Robotics, Mechatronics, and General Control ...